TheAtlantic.com uses cookies to enhance your experience when visiting the website and to serve you with advertisements that might interest you. By continuing to use this site, you agree to our use of cookies. Find out more here.

Usually, laying low during controversies is a savvy move for legislators. But when it comes to Trump and Russia, it brings its own risks.

Want to receive exclusive insights from The Atlantic—while supporting a sustainable future for independent journalism? Join our new membership program, The Masthead.

“Senator, I wonder if I could get a comment … "

That little scene is being enacted in one form or another across Washington on Monday, following the indictments of three former Trump campaign officials. Reporters are seeking comment from Republican officeholders. Republican officeholders are desperately eluding reporters, conforming to the maxim often attributed to Calvin Coolidge, “You don’t have to explain what you never said.”

Yet what is usually good advice can become, when it fails, spectacularly bad advice. Today is such a day.

The advice I want to offer here is not directed to the brave senator or the principled senator. It is directed to the run-of-the-mill senator—the prudent senator, the self-preserving senator. If you keep quiet today, you are putting yourself in jeopardy. Events are about to start moving very fast, and if you miss this moment, you will find yourself carried along by those events to places where it is not healthy for you to travel. 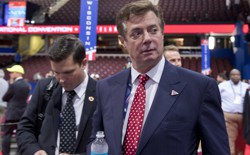 Here’s your problem, senator: The Trump political and legal strategy is about to get very radical. This weekend, after months of hesitation and distraction mongering, The Wall Street Journal editorial page ran a column advocating the end-the-probe, pardon-everyone position. It also mobilized an array of high-toned op-ed contributors—acclaimed intellectuals, well-known lawyers—in support. Fox News will amplify the argument, your constituents will be mobilized to support it—and you will be trapped. You may think you are biding your time. In reality, you will find that you have preemptively surrendered to an internal takeover.

Look, we all get that you have donors breathing down your neck demanding a tax cut. They gave you money, now it’s your turn to return the favor. You don’t want to focus on presidential misdeeds until you have delivered on your top priority. But by the time you are ready to move, things will have moved against you.

President Trump has no fact-based defense. The soap-bubble distractions floated by Fox News and in-the-tank pundits—Uranium One! Dossier!—pop as soon as they meet bright sunlight. Trump has already confessed on national television that he fired Comey to shut down the Russia inquiry. Today’s Papadopoulos indictment brings forth still more evidence that Trump feared the Russia inquiry because of the contacts it might uncover between his campaign and Russia: “On or about June 19, 2016, after several email and Skype exchanges with the former Russian MFA [Ministry of Foreign Affairs] Connection, defendant PAPADOPOULOS emailed the High-Ranking Campaign Official, with the subject line, ‘New message from Russia’: ‘The Russian ministry of foreign affairs messaged me and said that if Mr. Trump is unable to make it to Russia, if a campaign rep (more or someone else) can make it for meetings? I am willing to make the trip off the record if it’s in the interest of Mr. Trump and the campaign to meet specific people.’”

So Trump is likely to adopt a self-defense based on huge assertions of arbitrary power. “A president cannot obstruct justice through the exercise of his constitutional and discretionary authority over executive-branch officials like Mr. Comey.” Those words appeared in a Wall Street Journal op-ed posted Sunday afternoon by two well-known Republican lawyers. They are about to become the official White House position—and when they do, you’ll find yourself with little maneuvering room to prevent them from becoming your position as well. You will have to haul that position along with you into the 2018 elections, or (even more dangerously) the elections in 2020 or 2022, by which time even more of this scandal will have come to light.

You need to wonder whether the avoidance of blowback from Fox News in November 2017 is worth the risks hurtling at you in the weeks ahead. The Trump administration’s authoritarian moment is on the verge of materializing. The president seems likely to openly stake a claim to use his position as head of the executive branch to exempt himself from all law enforcement. If the president can never obstruct justice, he can use the pardon power to protect himself and his associates from any investigation into criminal wrongdoing.

By speaking out today, you may dissuade the White House from staking the whole Republican Party to an authoritarian, anticonstitutional position. At a minimum, you protect yourself from answering for it. Nobody’s asking you to be a hero. Just think ahead beyond the next 10 minutes and 10 days to your own interests and future.

R.I.P. in the Walls of San Francisco

The San Francisco columbarium plays host to the remains and memories of thousands of the city's deceased residents.