Shooting people was his business

Bryan Yant, like all police officers, has a job to do? While most fine, upstanding and honorable police officers see that job as upholding the laws of the community and protecting the citizenry all the while maintaining the protections afforded all of us under the United States Constitution. Bryan Yant sees his job differently. 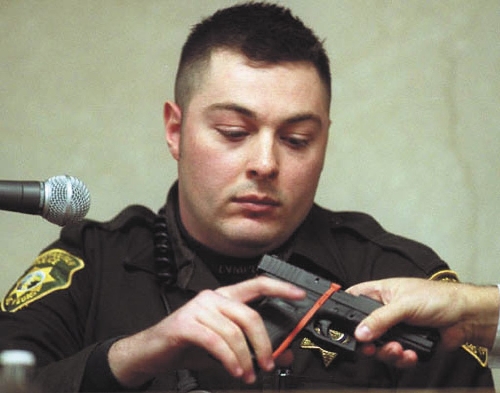 Bryan Yant  testified at a 2010 Clark County Coroner’s Inquest he defines his job as shooting unarmed suspects. Yant, in fact, was so dedicated to his chosen profession that 2010 was the third time he had to testify about his role in shooting an unarmed suspect. It was the third time Bryan Yant had fired weapon and struck someone. Twice he had fired the shots that took the life of the suspect. Once the suspect survived. According to Yant that was his job.It also seems that Yant  sees lying under oath, misleading judges, poorly researching   suspects and starring on reality television as parts of his job.

What Yant did not share with the 2010 inquest jury was how a Clark County Judge ruled that he and his partner, officer David Goris,  had lied in their sworn affidavits to obtain search warrants in  an unrelated case. Yant and Goris both, while under oath, swore they witnessed a confidential informant make a drug buy from William Sigler. They made this assertion in  hopes of getting a warrant to search Sigler’s home. The problem was Goris and Yant were lying. They was no record of a drug buy, because there was no drug buy. There was no drug buy because Sigler had been dealing in a poker tournament in the Bahamas the entire month. The information Yant used to procure a warrant to search Sigler’s home was at best wholly inaccurate, at worst a lie.

Yant’s inaccuracies on Sigler’ warrant application had yet to be uncovered when he made the request to search Trevon Cole’s home. This time Yant had proof that Cole sold drugs, proof in the form of video tape — video tape courtesy of Langely Productions. Langely, the company that brought us “Cops,” was following Yant’s exploits as an undercover narcotics detective as part of a yet unaired reality show. All that was left for them to wrap up Yant’s episode was an arrest. That should be easy enough, there was video of Cole selling almost 2 oz of marijuana to undercover agent over several weeks. They could pick up Cole at anytime, but stopping Cole on his way to the 7-11 was not nearly exciting as a night-time drug raid. The problem was the Trevon Cole that sold pot in Las Vegas had no violent history, had repeatedly told officers he was unable to procure weapons for them. In short, a low-level drug dealer selling less than $900 worth of weed didn’t warrant a no-knock search under the cover of night,

They say there are no problems, only opportunities to find a solution. Yant found the solution to his Trevon Cole problem in, well, Trevon Cole. As fate would have it there was a Trevon Cole with an extensive criminal history in California and in Texas. A history that would justify the night-time raid. It was of no concern to Yant that the Cole he referenced in his warrant application was the wrong age, height and weight as his suspect. Just as in the Sigler case Yant provided a judge with erroneous information and the search was approved.

After waiting for the Langley camera crew that was held up at another arrest, Yant decided he couldn’t wait any longer and he and six other officers breached the door. A few moments later Yant had taken his second life in less than a decade on the force. Trevon Cole was dead on his bathroom floor, a tube of chapstick in his hand and tiny amount of pot in the toilet.

Yant said he saw a gun in Cole’s hand. Yant said he ordered the man to show his hands. Yant said Cole made a “furtive movement” and  lunged at him, forcing him to “do his job.” Yant said a lot of things about that night. Most have been contradicted by either  the testimony of his fellow officers and forensic science.

Only one of the six officers present during the raid heard Yant give verbal orders to Cole. That officer testified that Yant said nothing to Cole about his hands.

The bullet that killed 300-pound Cole traveled through his cheek and neck in a downward angle, leading the medical examiner to find it “highly unlikely” that Cole stood and stepped toward Yant, as Yant claims.

Both the medical examiner and homicide detective who investigated the scene believe that Cole was crouched over the toilet when he turned toward Yant.

Assistant District Attorney Chris Owens said the evidence suggests there was an “accidental discharge” when Yant kicked in the bathroom door. Other officers present heard both a door kick and a gunshot simultaneously

Owens failed to tell the jury about Yant’s history of lying under oath before asking them to return with a decision. They considered the two days worth of testimony in less than two-hours before deciding that Yant was justified in killing Cole. Members of the inquest jury told the media that even though Yant’s testimony contradicted the physical evidence, they found him credible, and chose to believe his versions of events. They had never been told about the court finding that Yant had lied on previous warrant applications just the week before. They found a proven liar credible, because they were never told he was a proven liar.

The themes at play in the Cole shooting were not new to Yant, they were echoes of his two previous shootings.

During a 2002 inquest into his fatal shooting of a robbery suspect, Yant’s statements again contradicted the  evidence. During a chase of  Richard Travis Brown in the early morning of Nov. 17, 2001, Yant told the inquest jury that Brown reached for a gun as the two ran down a sidewalk. Yant fired three to four rounds. Brown fell, face first. Yant testified he  continued to yell commands at Brown, who was on the ground, to drop his gun. Yant said Brown then tried to re-aim the gun at him forcing  Yant to “do his job.” Yant fired another three to four rounds, killing Brown. The gun Yant claims Brown was pointing at him, well that  was recovered 35 feet away.

On Dec. 5, 2003,  in the Summerlin subdivision of  Country Club Hills, Yant was investigating a prowler just before dawn. When Yant spotted  Melvin Gilchrist, he said the  said the man charged him. Yant said Gilchrist attacked with a butcher knife and  pointed an aluminum baseball bat at him, which Yant said he mistook for a shotgun. Gilchrest said he never threatened Yant, but rather  dropped the bat and knife before Yant opened fire. When Yant started firing, Gilchrist said he ran away. He said Yant continued to fire as he fled, striking him in the hip

Even with the “justified” ruling, an internal investigation by Metro found Yant committed serious violations of department policy in the Cole incident. He was suspended without pay for a whole week, and assigned a desk job, interesting choice for a cop with such a poor track record of completing paperwork. Hopefully he no longer sees killing suspects as part his new secretarial duties.
Cole’s family (including his daughter born five days after his death) eventually settled a civil rights suit against the department for $1,7 million. Yant was not responsible for a single penny. Instead Yant continues to be paid by taxpayers to sit at a desk.
As of the last report released by Metro, Yant was paid $143,479.01 by county taxpayers.

What Do You Think? Cancel reply