Switch to the mobile version of this page.
Detroit Metro Times 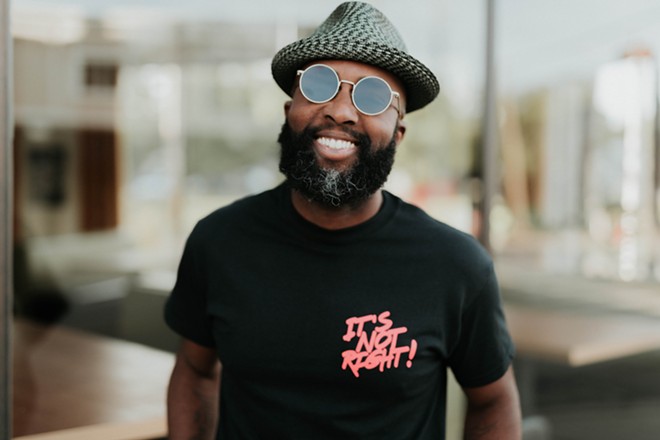 He confirms he is.

As we previously reported, the former Founders employee’s race is at the center of a contentious racial discrimination lawsuit that he filed in federal court last year against the Grand Rapids-based brewer.

Evans, a former manager who worked at Founders' Detroit and Grand Rapids locations, alleged “a racist internal corporate culture.” Some white coworkers exhibited multiple examples of “blatant” racism. Among other issues, they repeatedly used the “N word” around him, and management allegedly named a printer it used the “white guy printer” while labeling the printer for lower-tier employees the “black guy printer.”

Management, Evans says, did little about the racism he encountered, and he claims he was fired while preparing to make a second formal complaint to human resources about such issues.

The suit is moving through the trial process and is in in depositions. That’s where Founders revealed a startling and arguably ludicrous defense: The manager who fired Evans is claiming he didn’t know that Evans is Black.

A transcript of the exchange between Founders' Detroit general manager Dominic Ryan and Evans’ attorney, Jack Schulz, shows Schulz shifting from shocked to incredulous and perhaps a bit angry as Ryan claims he had no idea Evans is Black. Instead of just answering the question and moving on, Ryan digs in deeper and deeper, repeatedly asking for clarification when Schulz asks questions like “Are you aware Tracy is Black?”

At one point, Ryan even claims that he doesn’t know if former President Barack Obama, Kwame Kilpatrick, or Michael Jordan are African-American, because he has “never met them.”

Founders Manager Dominic Ryan: 2011, 2012. We had mutual friends before working there, so …

Schulz: OK, So you knew Tracy prior to his employment at Founders?

Schulz: OK, are you aware Tracy is Black?

Ryan: What do you mean by that?

Schulz: Are you aware Tracy is African-American?

Ryan: I’m not sure of his lineage so I can’t answer that.

Schulz: Alright. Are you aware that Tracy is a man of color?

Ryan: What do you mean by that?

Schulz: No? Do you know … You don’t know what it means for someone to be a white person or a Black person?

Schulz: You don’t need any. I can promise you that. We’ll keep the record as is. Someone’s skin color. A white …

Ryan: So that’s what you’re referring to?

Ryan: OK. Yes, I know the difference in skin tone.

Schulz: Are you able to identify individuals by their skin tone?

Ryan: What do you mean “identify”?

Schulz: I mean have you ever looked at Tracy Evans in your entire life? Have you? That’s a … that’s a genuine question.

Founders Attorney: You can answer.

Schulz: And did you ever realize that Tracy’s skin [is] Black?

Ryan: That’s not … I mean, is his skin different from mine? Yes.

Ryan: What do you mean “how”? It’s a different color.

Schulz: And what is the difference of that color?

Schulz: And that means?

Schulz: I mean, we could … This could be a one-sentence answer, you know. So by your … I guess your testimony is you have no idea if Tracy is a minority, if he’s African-American?

Ryan: I don’t know Tracy’s lineage, so I can’t speculate on whether he’s … if he’s from Africa or not.

Schulz: What do you mean lineage, from Africa?

Schulz: Have you ever met Black people who aren’t from Africa?

Schulz: Have you ever met a Black person born in America?

Schulz: And you were able … Have you ever met a Black person who didn’t tell you they were Black?

Ryan: Can you rephrase that?

Schulz: To your knowledge?

Schulz: So you don’t know him? What about Kwame Kilpatrick?

Schulz: To your knowledge, was Kwame Kilpatrick Black?


Evans called Ryan’s comments “completely offensive” and says he was surprised by the exchange, especially because he was friends with Ryan at one point. Founders management’s refusal to recognize an African-American and how he was being treated is “the whole reason we are in this predicament,” Evans tells Metro Times.

However, Evans says there’s something more significant than just offensive comments. The situation is indicative of a problem with how white-owned businesses view and treat Black employees.

“There’s this blind ignorance, and to me that’s the larger story,” he says. “A lot of these white-owned companies — and it’s not just Detroit, it’s all over the country — come in and have this sort of blindness to overt racism, and it has to be called out.”

Evans adds that it’s not uncommon for white managers like Ryan to “have utter disregard for people of color and the things that we go through at their establishment.”

“How can one expect to know what minorities go through if they can’t even acknowledge that [some employees are] minorities?” he asks.

In a statement provided to Metro Times, a Founders attorney seemed to double down on Ryan’s strategy, and denied that his claim that he doesn’t see skin color is a “defense.”

Of course, at this point, Founders had been served with a federal racial discrimination lawsuit that explicitly spells out that Evans is Black.

Stay on top of Detroit news and views. Sign up for our weekly issue newsletter delivered each Wednesday.

Jump to comments
« A new fried chicken restaurant is c…

More on Table and Bar

Most Read
Most Commented
This Issue

Best Things to Do In Detroit

Subscribe now to get the latest news delivered right to your inbox.

All parts of this site Copyright © 2019 Detroit Metro Times.