The drying of the West

THE first rule for staying alive in a desert is not to pour the contents of your water flask into the sand. Yet that, bizarrely, is what the government has encouraged farmers to do in the drought-afflicted south-west. Agriculture accounts for 80% of water consumption in California, for example, but only 2% of economic activity. Farmers flood the land to grow rice, alfalfa and other thirsty crops. By one account, over the years they have paid just 15% of the capital costs of the federal system that delivers much of their irrigation water. If water were priced properly, it is a safe bet that they would waste far less of it, and the effects of California’s drought—its worst in recorded history—would not be so severe.

The “ridiculously resilient ridge,” an unusually persistent high-pressure zone, has installed itself off the Pacific coast, stopping precipitation systems from travelling towards the Sierra Nevada, where they typically deposit their moisture. Last month snowpack in the Sierras fell to 12% of average January levels. Rainfall has disappointed for three years. Lake Folsom, near Sacramento, has shrunk so far that an old gold-rush town has been exposed. The rainy season has six weeks or so to go, but there is little sign of respite. California is bracing itself for a brutal fire season.

In this section
Reprints

State officials have cut off supplies to water districts; their federal counterparts will soon follow suit. Some farmers who made the risky decision in past years to plant lucrative pistachio and almond trees, which require year-round watering, have had to bulldoze them. Others are fallowing farmland, or digging deeper to tap brackish groundwater, further depleting aquifers. 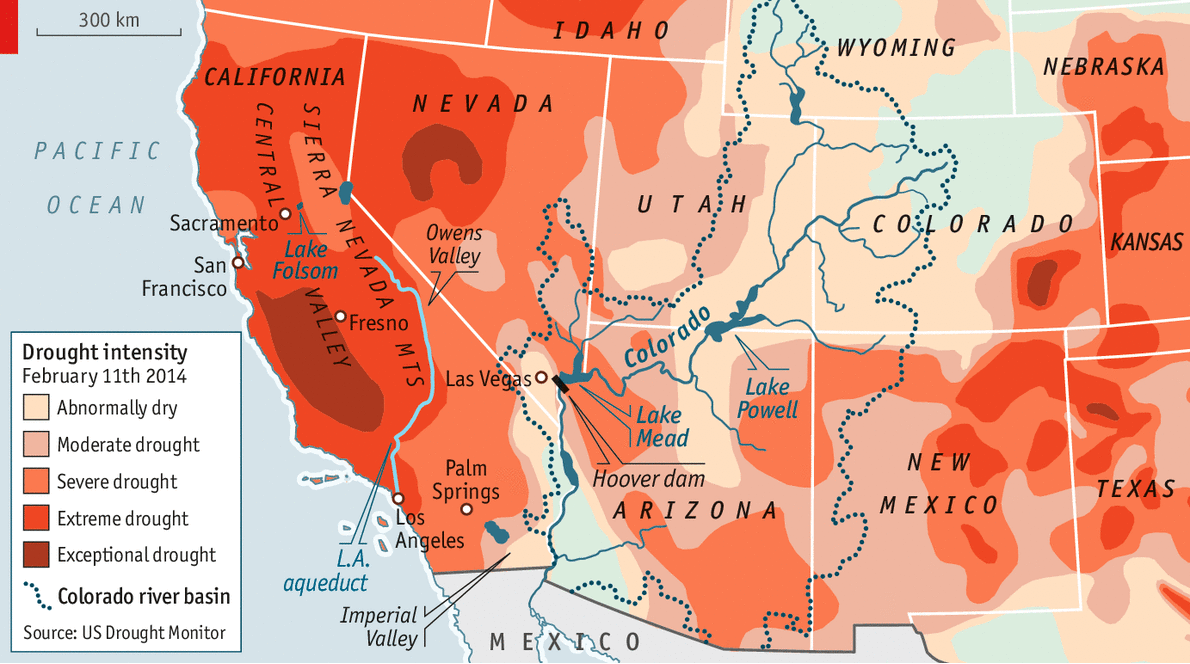 Drought is also afflicting California’s neighbours to the east (see map). But they, along with California, are grappling with a longer-term problem: the Colorado river, which waters seven states (plus part of Mexico), is struggling to service its clients. Thanks to declining flows, last year the Federal Bureau of Reclamation (FBR), which oversees its use, cut the release of water from Lake Powell on the Arizona-Utah border to Lake Mead, America’s largest reservoir. It has never done this before.

The rules are showing their age. The law of the river, which allocates precise amounts of water to the seven Colorado-basin states, was signed in 1922. The region has grown quickly and unevenly since then but the law has proved resilient; states used to sue each other with wearying frequency but now work together well.

The problem is that 1922 fell in an unusually wet period. For decades that did not matter; the basin states were not big enough to demand their full allocation. No more: five of the seven are among America’s ten fastest-growing states. Moreover, climate change may be reducing supply even as demand rises. In 2012 the FBR said that by 2060 the supply gap from the Colorado could reach 3.2m acre-feet (an acre of water a foot deep is the standard unit for large amounts of the precious liquid).

Traditionally the West has tried to engineer its way out of water problems, and that approach is not dead in Nevada. Greater Las Vegas, where most Nevadans live, depends on Lake Mead for 90% of its water, but before long the lake is expected to fall below the level of the first of two pipes that connect it to the city. So officials are building a deeper $816m “third straw” to maintain supply. They also want to lay a 300-mile pipeline to bring water from Nevada’s sparsely populated north to Las Vegas, a controversial plan some compare to Los Angeles’s removal of water from the Owens Valley 100 years ago (as fictionalised in Roman Polanski’s “Chinatown”).

Unhappily for Nevada and Arizona, California’s problems are also theirs. Southern California is entitled to 4.4m acre-feet of Colorado water a year, mainly for farmland in the Imperial Valley. Under a 2007 agreement the three states may store water they do not need in Lake Mead for later withdrawal. Because of its drought California is now drawing down the 580,000 acre-feet it has saved in recent years; it took around 80,000 in 2013. That is hastening the day when Mead falls below 1,075 feet (it is currently at 1,109) and compulsory cuts kick in. For complex historical reasons Nevada and Arizona will lose a combined 500,000 acre-feet a year before California has to give up a drop.

Douglas Kenney of the University of Colorado Law School predicts “a new era” of water management. One still occasionally hears grand talk of transporting water from the Missouri river, or of ferrying icebergs from Alaska, but these pipe dreams are giving way to a focus on conservation and reform. Thanks to careful planning by water authorities many cities in the West have slashed per-capita water use; in the past 12 years Las Vegas has cut consumption by one-third as its population grew by a fifth. Its successful “cash-for-grass” programme (since renamed after grumbles from the Drug Enforcement Administration), which pays residents to tear up lawns, has been imitated elsewhere. All water used indoors is recycled.

But more can be done, says Michael Cohen at the Pacific Institute, a think-tank. Cities in dry places like Israel and Australia still consume far less water than Las Vegas. Other cities in the West have a long way to go: half the houses in Sacramento do not meter water; Palm Springs, close to where Mr Obama teed off this weekend, still peddles the old illusions of desert verdancy. As for water trading, it is underdeveloped within states, let alone between them.

Most of the future growth in water demand is likely to come from cities. Some therefore argue that urbanites should bear the burden of reducing demand. This is too kind to farmers, who waste far more. Crops that cannot be grown without subsidies should not be grown. It should not take a drought to make people stop building paddy fields in the sand.

From the print edition: United States

View all comments (46)
Want more? Subscribe to The Economist and get the week's most relevant news and analysis.
From the print edition Feb 22nd 2014

Politics: Nick Clegg on being punished in the polls

Democracy in America | 3 hours 6 mins ago

Amazon’s next move: From books to builders

Germanwings flight 9525: A human response to a human tragedy

In Other Words
Try our new audio app and website, providing reporting and analysis from our correspondents around the world every weekday

Want more from The Economist?
Visit The Economist e-store and you’ll find a range of carefully selected products for business and pleasure, Economist books and diaries, and much more

Refer & Get a Free Month

For every friend you refer who purchases, you earn a reward!

Need more details? Check out the Terms and Conditions.