The former Australian Greens leader Bob Brown has won a landmark high court fight against Tasmanian anti-protest laws passed in 2014 and under which he was charged in 2016.

Brown, the third person arrested under the Workplaces (Protection from Protesters) Act 2014, argued the laws directly targeted implied freedom of political expression in the constitution and were therefore unconstitutional.

The landmark case stemmed from Brown’s arrest while filming a video about an anti-logging protest at Lapoinya state forest in Tasmania’s north-west in January 2016. 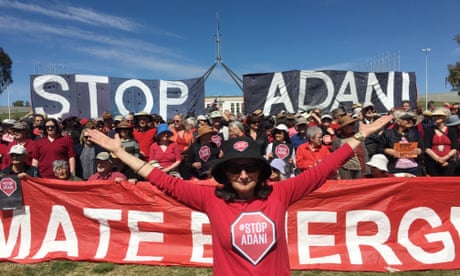 Richard Di Natale ‘confident’ if project can’t be stopped in parliament or for financial reasons, Australians will stand in front of bulldozers
Read more

The Tasmanian government dropped the charges against Brown and his co-arrestee, Jessica Hoyt, once they mounted the high court challenge but Brown continued the challenge to protect future environmental actions, arguing they impinged on an implied right to free speech in Australia’s constitution.

In a 183-page judgment, the court ruled in favour of Brown and Hoyt by a six-to-one majority.

The law prohibited protesters from “preventing, hindering or obstructing” businesses, even in public areas such as state forests or the access points to areas where commercial activities are conducted, if they ought to have known the impact their political activity would have on the business.

Speaking after the decision was handed down, Brown told the Guardian it was “a great day for Australian democracy”.

“The high court has said: ‘There is a right to political expression and we will uphold it.’ You can’t just start jailing people on account of their political beliefs or peaceful actions they might take to uphold those beliefs.”

At the hearing in May, Brown’s counsel, Ron Merkel, told the court the law discriminated against protesters by allowing companies to give consent to certain political activities, in effect silencing only those opposed to logging.

Merkel described the law as “unusual” and without precedent in Australia because police powers to order protesters to move on and the automatic ban on them returning for four days were only enlivened when they agitated “political, environmental, social, cultural or economic issues”.

Michael O’Farrell, the solicitor general of Tasmania, explained to the court that charges against Brown had been dropped because police had “misapprehended” the legal status of the area he had been found in, and it was not a business premises or access area.

O’Farrell submitted the law was not designed to ban protests per se but only those who intended to, or could be imputed to have intended, to stop or hinder lawful business activity and successfully had that effect.

He suggested there would be nothing unlawful about protesters holding signs outside a logging area and standing aside to allow vehicles to enter.

O’Farrell accepted the public is allowed to use state forests where their use is “not incompatible” with forestry uses but said that “doesn’t mean Brown and Hoyt have some sort of freestanding right to protest” in the area.

A majority of the court agreed the laws did breach the constitution’s implied freedom of speech. In particular, they ruled that by stopping members of the public from carrying out protests on public lands – “forestry land and related business access areas” – the laws impugned those free speech provisions.

The Adani mine is this generation's Franklin River. People power can stop it

Bob Brown
This is the environmental issue of our times and the Great Barrier Reef is at stake. But people standing up for what they believe in has unbeatable power
Read more

But the court also ruled that aspects of the law that stopped protesters from hindering business activity on business premises were allowable.

Since the Hodgman government introduced the laws after an election promise in Tasmania in 2014, as part of that state’s long-running forestry wars, two other states tried to follow suit.

New South Wales succeeded, introducing laws that imposed a tenfold increase in fines for people protesting against coal seam gas and mining developments and increased penalties to a possible seven years in jail for “hindering the working of equipment belonging to or associated with a mine”.

Both the NSW Bar Association and the Law Society of NSW have attacked the NSW laws, saying they also encroach on rights to free speech implied in the constitution. Three people have been arrested under those laws and pled not guilty to challenge them.

Sue Higginson from the NSW Environmental Defenders Office, who is representing those three arrestees, said the Brown victory was promising for their case, and they would examine it closely to see if it means they have a case to challenge the NSW laws on similar grounds.

The former Western Australian government proposed similar laws but they were not enacted before the March election and have been thrown out by the McGowan government.

Brown said his victory ought to give other state governments pause before introducing similar laws. “The corporate sector seeing it can’t win environmental arguments has got weak politicians to try to knock out the environmentalists and it’s not working,” he said.

The Human Rights Law Centre appeared before the court in support of Brown, and before the decision said it would be important for Australia’s democracy.

“Governments shouldn’t be able to sell off our democratic rights in order to protect business interests,” De Kretser said. “The high court’s decision strikes down key parts of this excessive legislation that led to the arrests that sparked this case. The Tasmanian government should now scrap the legislation entirely.”