The Adani Group’s proposed mine-rail-port development linking a massive new coalmine at the Carmichael site in the Galilee basin to an expanded port at Abbot Point near Bowen was always going to be an electoral negative for the Palaszczuk Labor government.

One the one hand, Labor’s Liberal National party and One Nation opponents are enthusiastic backers of the Adani project, and will use this fact to campaign in marginal seats in Townsville and Rockhampton. On the other hand, the Greens, backed by the majority of the Australian public, are strongly opposed. The Adani issue could well cost Labor the inner-city seat of deputy premier Jackie Trad, and possibly others. 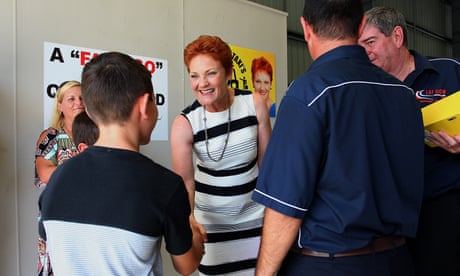 'Now we are in the trenches': Queensland Labor and LNP face One Nation threat

Party insiders confess they don’t foresee either side getting a majority in the state election, which could leave One Nation as kingmakers
Read more

Lined up behind the Greens is all the environmental and economic evidence that the project should be abandoned. The mine, if it went ahead, would represent a disastrous increase in the global supply of coal. And, since it can only proceed with massive financial support from Australian governments, it will be an economic disaster as well.

For a long time, the Palaszczuk government managed a delicate balancing act, rejecting LNP proposals to tip public money into the project, and avoiding overly enthusiastic support, while doing nothing that would lead to their taking the blame when the project fell over, as remains the most likely outcome. However, such a balancing act could only be sustained for so long.

In June, the Queensland Labor government finally came down on Adani’s side, negotiating a royalty holiday and other concessions. Premier Annastacia Palaszczuk flew to Townsville for an official opening of Adani’s regional headquarters, which promised to welcome about 500 employees “in coming months”. As usual with Adani, the promise was not kept. Nearly six months later, there have been hardly any new hires and the regional headquarters now promises only 150 jobs.

Of course, the big number that swayed the government was the promise of 10,000 jobs, regularly discredited and just as regularly repeated. Adani’s own expert admitted that the modelling behind the claim was spurious and the true figure was closer to 1,500, but that hasn’t stopped the spruikers.

More importantly, these claims ignore the fact that the public money needed to get Adani started could be used to create more, and more socially productive jobs than those generated by a fly-in-fly-out (Fifo) mine and a largely automated railway. As I showed in work for Farmers for Climate Action, the agricultural sector alone could generate more jobs than the Adani project.

The case that Adani will cost rather than create jobs has been confirmed, in spectacular fashion, by none other than Townsville mayor Jenny Hill, the project’s most enthusiastic backer. To secure a promise from Adani that half of the Fifo workforce will be based in Townsville, Townsville City Council agreed to pay half the cost of building an airstrip at the mine site, more than 600km outside the council’s jurisdiction.

Under the deal, the airstrip will be used, free of charge, by Adani, but any subsequent mines will have to pay. The estimated cost to the city is $18.5m. Rockhampton, which had been in the running to secure the whole base, had no alternative but to match Townsville’s offer.

This would be a misuse of public money under any circumstances but what has just come to light is the truly appalling fact that the money given to Adani has been saved by Townsville council by cutting over 100 jobs. The process is euphemistically described as “belt-tightening”, but of course the consultants and senior managers who pushed the process through won’t be tightening their own belts. They never do. 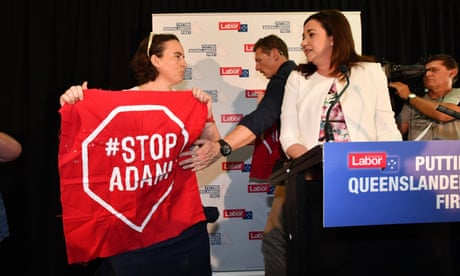 The most likely outcome of all this is an anti-climax. Having been turned down by all the major Australian banks, and nearly all the major global banks, not to mention the State Bank of India, Adani has to rely on the generosity of the Turnbull government’s Northern Australia Infrastructure Facility to get started. But the $900m it is seeking won’t be nearly enough, so approaches are being made to China’s state-owned banks. While the lending decisions of these banks reflect a mixture of politics and economics, it’s hard to see why they would throw away their money on a project with such lousy finances and no obvious strategic benefit.

Unfortunately for the Palaszcsuk government, the final announcement won’t be made until March 2018. When the project was officially launched in June, financial closure was promised for December this year, which would have resolved the issue before the due date for an election. But it’s always a mistake to rely on Adani promises, and the financial close date was extended just far enough to make this impossible.

As a result, Palaszczuk faces an election campaign where she will be dogged by anti-Adani protesters on the one hand and doubts about her enthusiasm for the project on the other. The LNP faces no such problems. But should they win, their difficulties will start when the project falls over, as it almost certainly will.