Should Australia vote yes for marriage equality, the radical right will launch an unprecedented assault on Australia’s anti-discrimination laws.

Preparations for battle are being made under the cover of the supposed threat marriage equality poses to freedom of religion, free speech and parental rights.

By now every voter has heard the rhetoric: bakers will be jailed for refusing to decorate gay wedding cakes, bishops will be hauled before tribunals simply for defending their definition of marriage, parents will have to accept radical sex education for their children. 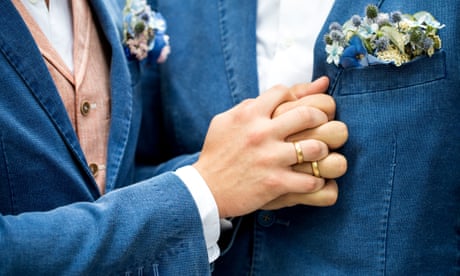 Exclusive: ‘No one should be coerced to use their creative talents,’ no campaign’s Coalition for Marriage says
Read more

To prevent these “unintended consequences” of marriage equality the radical right wants businesses to be allowed to refuse their services to same-sex couples, church hospitals to be able to sack staff who enter same-sex marriages, church schools to be exempt from diversity programs, and, above all, the removal of hate speech laws.

The link the radical right has made between freedom and marriage equality is, of course, the opposite of the truth.

In other countries, marriage equality has benefitted children, strengthened families, and enhanced personal and religious freedoms.

Most people see through the scaremongering, which is why it is unlikely to defeat the yes vote.

But the threat-to-freedom narrative was never meant to win the postal survey.

Its real goal is to stop a yes vote being implemented.

If Australia votes yes, Coalition conservatives will attempt to load down marriage equality legislation with so many exemptions to anti-discrimination legislation that it will be difficult for the Senate to support.

I fear Liberal moderates, including the prime minister, will agree to these exemptions as a small price to pay to get marriage equality off the agenda.

The moderates seem to fundamentally misunderstand that the demands of the radical right – be they for a public vote or for discrimination exemptions – are about slowing down marriage equality, not expediting it.

The other incentive for Liberal strategists to support discrimination exemptions will be to wedge Labor in much the same way the Howard government wedged Labor into supporting its 2004 amendment to the Marriage Act explicitly banning same-sex marriages.

I don’t expect this current wedge to be successful.

Labor has already drawn a line in the sand saying it will support a bill proposed by Senator Dean Smith that has fewer exemptions than the radical right wants.

The stories you need to read, in one handy email

Sign up to The Guardian Today, Australia edition and get today’s must-reads delivered straight to your inbox each day
Read more

The LGBTI community has also declared, through a number of large surveys, that it will not suffer more discriminatory laws after struggling so long for full legal equality.

Given all this, a pessimist would predict that marriage equality legislation is destined to fail despite a yes vote, and that the Coalition and Labor will go to the next election loudly accusing each other of being responsible for that defeat.

Is there a way to avoid this and have a yes vote implemented sooner rather than later?

The key is exposing the “freedom” narrative for what it really is, a bid for power and privilege.

Take the idea of religious freedom: Since the Enlightenment it has meant not discriminating against or disadvantaging citizens because of their religion.

But first in the US and now Australia, that meaning has been twisted into its opposite.

“Religious freedom” is now invoked to justify actively discriminating against and disadvantaging LGBTI people in the name of religious values, be it through refusing us services, sacking us from jobs, or speaking about us hatefully.

“Religious freedom” has come to mean giving people of faith legal privileges that other people don’t have.

If contemporary proponents of “religious freedom” were genuine they would want this freedom enshrined in a bill of rights.

Almost to a person they don’t, because the freedom they want is the freedom to impose their values on others.

I believe that when Australians see how privilege is masquerading as freedom they will be much less likely to tolerate it.

The other way to prevent the “freedom” narrative from robbing Australia of marriage equality is to remind the nation why anti-discrimination laws matter.

The point of these laws is to ensure each of us is taken on our merits as an employee, a tenant or a customer, and not unfairly judged because of irrelevant characteristics like race, social origin, religion or sexuality.

Anti-discrimination laws aim to ensure we all have the same opportunities in life regardless of the colour of our skin, the school we went to or who we love.

I can understand why some people think baking a gay wedding cake is a trivial matter, but the next step is a sign in the window saying “No Gays”, and the step after that a sign that says “No Muslims” or “No Blacks”.

Australians will stand up for our anti-discrimination laws when reminded of how these laws promote fairness and the slippery slope that lies ahead when they are weakened.

Bede Harris
From religious freedom to infringing rights, if we apply principled reasoning to the same-sex marriage debate, most opposing arguments don’t stack up
Read more

To defend our anti-discrimination laws from the coming attack we must begin now to explain why these laws matter, and why “religious freedom” is a con.

Only then can we be confident a yes vote will translate into full equality.

opinion
promoted links from around the web

Tourism New ZealandFind out more about cycling along New Zealand’s...

Health InsuranceBorn Before 1962? Read this Now and Save on...

MitsubishiFor over 30 years the Mitsubishi Triton has...