In an extraordinary public defence of his own mental stability, Donald Trump issued a volley of tweets that seemed guaranteed to add fuel to a raging political fire. 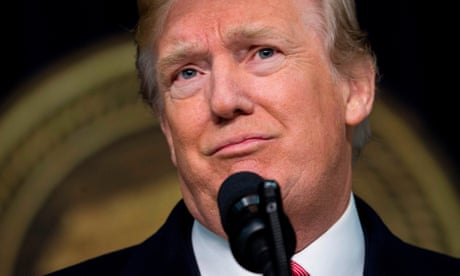 Booked! Trump, staffers who cried Wolff and a week of fire and fury

When the Guardian published extracts of Fire and Fury, Washington was rocked. Now many are questioning the president’s chances of staying in the job
Read more

Suggestions in a new tell-all book that he was mentally unfit to be president were out of “the old Ronald Reagan playbook”, Trump wrote on Saturday.

“Actually,” the president added, “throughout my life, my two greatest assets have been mental stability and being, like, really smart.”

He also said he “would qualify as not smart, but genius ... and a very stable genius at that!”

The book, Fire and Fury: Inside the Trump White House, by Michael Wolff, burst into the public consciousness on Wednesday, when the Guardian reported excerpts nearly a week ahead of publication. Trump threatened to sue but succeeded only in prompting the publisher Henry Holt to bring the book forward.

Wolff presents a picture of a doomed administration lurching from crisis to crisis, steered by a childlike figure who responds to overstimulation with intense, reflexive outbursts.

At a lunchtime press conference at Camp David, the president was asked why he tweeted. In a characteristically freewheeling answer, he said: “Only because I went to the best colleges or college. I went to – I had a situation where I was a very excellent student, came out and made billions and billions of dollars, became one of the top business people.

“Went to television and for 10 years was a tremendous success as you probably have heard. Ran for president one time and won.”

In fact, in 1999 Trump mounted a first run for the White House when he sought the nomination of the Reform party.

The president continued, referring to Wolff: “And then I hear this guy that does not know me – doesn’t know me at all – by the way did not interview me for three – he said he interviewed me for three hours in the White House – it didn’t exist, OK? It’s in his imagination.”

Trump called Wolff a “fraud” and his book a “work of fiction” and complained about US libel laws, which he has threatened to change.

The White House chief of staff, John Kelly, told a White House pool reporter the president tweeted to get around the filter of the media. Trump had “not at all” seemed angry on Friday night or Saturday, Kelly said, adding that the president had watched the Hugh Jackman movie The Greatest Showman – about the hoaxer and politician PT Barnum – with lawmakers and others.

Before Trump’s tweets, Wolff spoke to the BBC. He said: “I think one of the interesting effects of the book so far is a very clear ‘emperor has no clothes’ effect.

“Suddenly everywhere people are going: ‘Oh my God, it’s true, he has no clothes.’ That’s the background to the perception and the understanding that will finally end … this presidency.”

The 25th amendment of the US constitution provides for the removal of a president if a majority of the cabinet and the vice-president agree. In Wolff’s book, the then White House strategist Steve Bannon refers to Vice-President Mike Pence as “our fallback guy”. Pence stood to Trump’s right at Camp David, his gaze rarely leaving the president.

Bandy Lee, an assistant clinical professor at the Yale School of Medicine, briefed a dozen members of Congress last month on Trump’s behaviour. At the end of a week that began with Trump taunting North Korea over the size of his “nuclear button”, Lee told the Guardian “the danger has become imminent”. 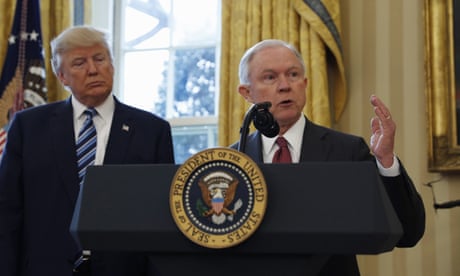 'Not way off, but off': Trump challenges reports he meddled in Russia inquiry

Fifty-seven House Democrats have signed on to a bill to establish an oversight commission to determine if a president is mentally and physically fit.

“We need this legislation quite apart from the Trump administration,” Jamie Raskin, a Democrat from Maryland and the author of the bill, told the Guardian.

“The 25th amendment was framed during the nuclear age – the nuclear arsenal being a vast destructive power that is vested, as the president reminded us this week, in one person who views himself as having the power to press a button. We certainly don’t want someone in that position who lacks the power of empathy.

The White House has forcefully criticised Wolff, who has said he stands by his work, which included more than 200 interviews and extensive access to the West Wing and key administration figures. 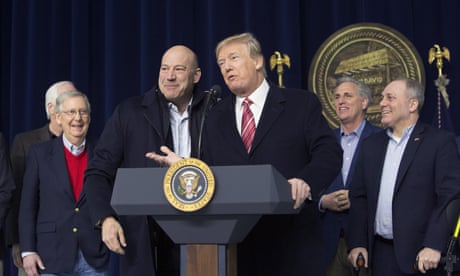 At Camp David, Trump referred to Bannon derisively as “Sloppy Steve”. The former Trump campaign chief has avoided extensive comment, though in the aftermath of the Guardian story he called Trump “a great man”.

Trump’s reference to “the Ronald Reagan playbook” was a curious one. Reagan was diagnosed with Alzheimer’s, a degenerative brain disease, in 1994, five years after leaving office.

The extent to which he suffered during his time in the White House remains a matter of contention. Reagan, like Trump in his 70s when in office, long faced questions over his mental state. Opponents pointed to his habit of forgetting names and making contradictory statements.

In the Hollywood Reporter this week, Wolff wrote of Trump: “Everybody was painfully aware of the increasing pace of his repetitions. It used to be inside of 30 minutes he’d repeat, word-for-word and expression-for-expression, the same three stories – now it was within 10 minutes. Indeed, many of his tweets were the product of his repetitions – he just couldn’t stop saying something.”

The White House press secretary, Sarah Sanders, has said Trump will undergo his annual physical examination on Friday 12 January. The results are due to be made public.

more on this story
promoted links from around the web

Electricity And GasShocked By Your Energy Bills? Here's What To Do...

DucereCan completing an MBA get you a salary increase?

UNHCRYour monthly gift can help someone in need

AIMETLooking to get qualified in Project Management?